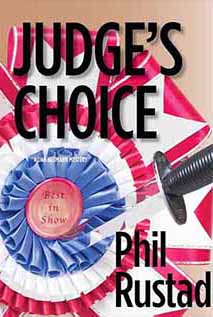 Murder at a dog show!

On a beautiful summer morning in central Minnesota a crop duster pilot spots something he never expected to see–the naked body laid neatly in a ditch between two new home building sites. The county sheriff investigates and is stumped by the extraordinarily violent death of a local woman. Knowing he’s in over his head, he calls an old friend, homicide investigator, Dan Neumann.

Dan and his fellow investigator Maria Fernandez rush to Mora to help Dan’s past mentor. As the facts begin to emerge, Maria thinks she’s seen this killer’s handiwork before, in Arizona. And, she recalls that it may have had something to do with a local dog show.

Dan and Maria follow the clues, they call on Dan’s lifelong buddy, Pete Anderson, a veteran dog show participant, for help. As the case goes national, more help is needed and Dan’s friend, FBI Special Agent Will Sanford is added to the team. Now the team is working a major case looking for what could be a string of killings stretching back dozens of years. The killer is working more frequently now, an indication that he may be moving toward the typical serial killer climax–a mass murder involving many innocent victims. They have to stop him.